Four Seasons in a Day

Evidently, “four seasons in one day” is a song title, but I’ve been hearing it used to describe New Zealand weather, and I would have to agree that it’s accurate. (As I type this, I’m sipping tea, post a boiling hot shower, because I am SO FREAKING COLD.)

Fine. I admit it–for all you people to whom I rubbed it in that I would be spending my winter where it is summer, I stand corrected: I am spending my winter in a place where the days are long (to represent summer in theory, perhaps), and the weather is at the mercy of some toddler in heaven shaking a magic 8 ball. One minute you’re sweating, stripping off your clothes, and the next, just as if the whole climate has been shaken around, there will be a breeze—mind you, not a “warm” summer breeze, or even a “cool” summer breeze, but an, “I’m blowing up from ANTARCTICA” breeze—and you will have to bundle up into your jacket on the beach. And that’s on a warm day.

For the last couple of days, however, it’s been actually cold, cold to the point where people have said, “I think today was colder than some of the days during last winter.” For those who know me, you can imagine the look that is on my face right now. Yes, ha ha, laugh it out. We all know how much Jenny loves sudden freak cold weather. Particularly when she has brought her wardrobe’s finest summer clothing, including bathing suits, sun dresses, and tank tops.

Right before I left the States, I made the impulse decision to go ahead and bring a sweatshirt and a fleece, and I have to say, that’s the only impulsive decision I’ve ever made that’s worked out to my benefit. I don’t know what I’d do without them because I wear one or the other every day, indoors, without exception. (“Indoors?” you might ask. Why, yes. Because here in New Zealand, there is no such thing as weather-proofing. When the wind blows, it enters even closed windows and doors, and because none of the warmth gets retained, the result is a house that is always colder than the outside temperature.)

This morning when I got out of bed, I had three cups of coffee, the last of which was more or less just hot water because my house was that cold, I needed to be heated from the inside out. I sat huddled in my sweatshirt, hood tightened, wearing my one pair of pajama pants that has ripped at the bottom and is now being held together with a safety pin. I AM IN NEED OF WINTER CLOTHING.

Before leaving for work, I looked at the weather online and it said the temperature was 8° (C). With wind! And I had to walk in that. Granted it was 6:15a.m., but when you’re traversing to work at that hour, you’re already miserable; the least you could ask for is pleasant conditions.

My parents have considerately shared the news that it has been in the 70s (F) in Roswell this week, and oh, isn’t it funny that it’s warmer in Roswell, during the winter, than it is in New Zealand, during the summer?

Well, I had meant to write about something else—something more along the lines of steep streets and hitchhiking and clubbing in Queenstown, but I’ll have to attempt to do that on a later date. It is now past my bedtime! I’m working the morning shift, which begins at 6:30, for six days in a row (AWESOME), so I have to be in bed by 10. For goodness sakes, there is light on the horizon at 10pm:

And since I’ve done an entire blog of ranting, I’ll end with another picture.

The reason I still love where I am: 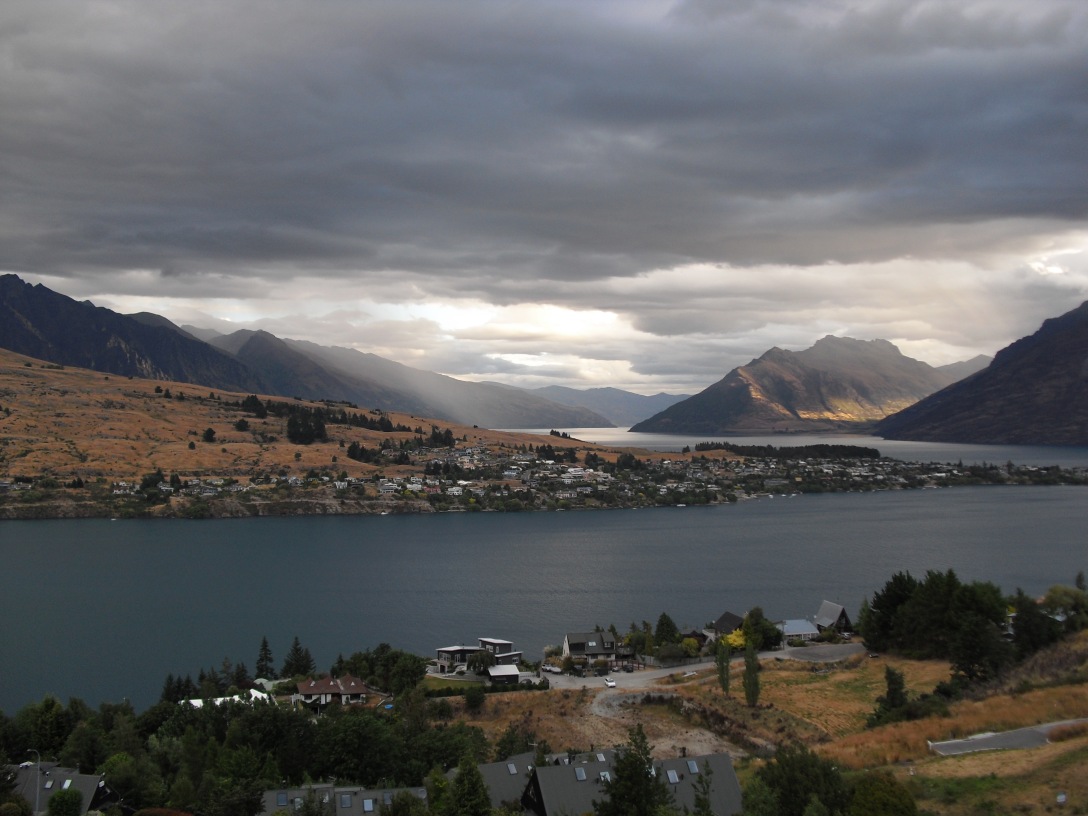 One thought on “I’d like some warmer pants, please”

Follow They Call Me Fushilou on WordPress.com
Join 1,587 other subscribers