At Archodissa, that has a special meaning. It means there’s Live Music from 9pm until 1 a.m. It means there will be dancing and napkins and champagne. It means it’s Greek Night.

To attend Greek Night is an unforgettable experience. The small patio is transformed to accommodate 150 customers, tables moved from upstairs and arranged with tetris-like precision, every chair in the restaurant accounted for. Paper table covers—white with blue maps of Thassos Island—clip over the checkered table clothes, and water glasses sit upside down in the center of the table, noting “this table is reserved.” As 9 p.m. approaches, the restaurant starts to fill.

Grilled octopus, horiatiki salad, pork neck marinated in the wood oven all day, fried calamari, fresh tzatziki, steamed mussels in wine sauce, all of the food comes out without a hitch. Retsina and sprite, ouzo, housemade wines and tsipouro distributed by the carafe. Glasses clink together with shouts of many languages, “Yia mas!” being the cheers of the Greek.

There’s the three-person (unnamed) band who position themselves around the small stone table, directly across from the kitchen door. Paris takes the drums; Giorgos, the bouzouki; and Nikos, the bass and vocals. Sometimes they rotate, and Paris will play bouzouki and Giorgos the drums, or Giorgos will sing, or—most certainly—later in the night, once the restaurant slows down and people are on dessert and drinks, Tassos (the owner) will take the microphone and sing.

Sometimes it takes a while before the dancing starts, and other times there are locals who are eager to jump in. Linking arms, linking hands, they form a circle and move to counterclockwise, step, step, kick, kick, step, step, kick, kick. There are dances from the islands in which the circle compresses and expands, mimicking the movement of the sea. At first, the number of dancers is small—only a couple of people—but an unidentifiable switch will flip, and the circle will grow: Greeks who are seasoned and visitors who pick up the steps as they go, women in four-inch heals and women in flip-flops who kick off their shoes. There are men in their 70’s missing teeth, children who are guided by their parents, young and old, foreign and local, coming together to take part in this circle-dancing tradition. 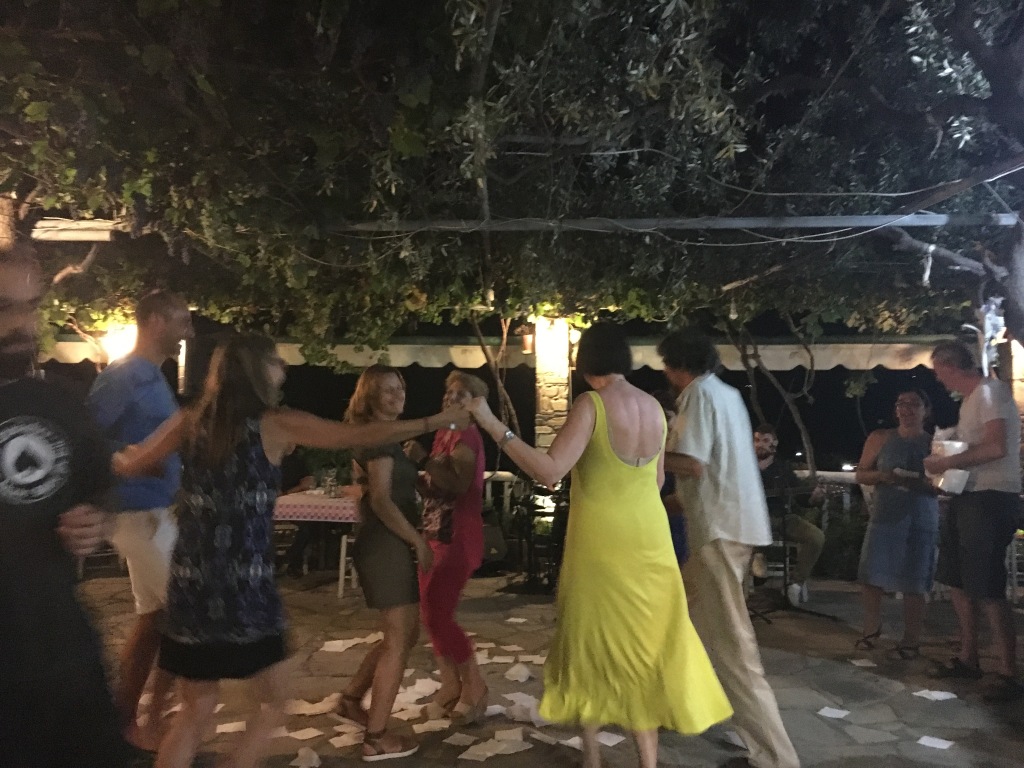 And then the music will shift, a distinct eleven-count rhythm, and the outside circle of people will drop to their knees and clap as one person takes the center stage. This is the solo, this is where the dancer feels the music on his or her skin, this is the zimbekiko. There’s no way to teach this dance; it must be felt. Tassos of Thassos calls one of the waiters to grab a case of napkins, and all around the circle people take as many as their hands can hold and toss them into the air to encourage the dance. People gather around with cell phone cameras and take videos. Traditionally, only men performed this zimbekiko, but here, women move to the center of the floor when their songs are played. Glancing around the circle to everyone clapping, one will see everyone singing as well. Somehow, all the Greeks know all the words to all the songs.

Sometimes a wine glass is put in the center of the floor, the dancer moves around it. (If it’s Tassos, he’ll dance around it until he gets down on his knees, leans back, and shatters the glass with a single finger). Sometimes there will be champagne shaken and poured, spilling into two glasses. Sometimes there will be sparklers, just because—a closet of expired flares from fishing boats lying in wait. Inevitably a handful of people every week will be astonished that the man who runs the kitchen, takes the orders, pulls food from the oven, cooks on the grill, writes receipts, greets every customer with handshakes and hugs will also sing with the band and dance zimbekiko. This is how “Tassos of Thassos” earns his name. The waiters and the cooks, when they aren’t running from table to table, filling orders, clearing tables, or fetching napkins can sometimes be seen on the crowded dance floor as well. It is a night to remember.

What most people don’t see is the after hours: sweeping up 30,000 napkins, rearranging tables, putting away chairs until 4 a.m. They don’t see the final meal prepared just an hour before the sun rises for the employees who haven’t eaten since 5 p.m., but have run—literally run, around all night. They don’t see that at 8 a.m. everyone is back at the restaurant, preparing for another day. These are things that only I got to see, the joys and the exhaustions of Wednesdays.

Today is Wednesday, and I am back in America. I am wishing for both the joy and the exhaustion, the dances and the food, the friendship and the kefi.

I am missing you all at Archodissa this Wednesday. 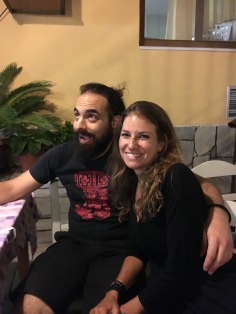 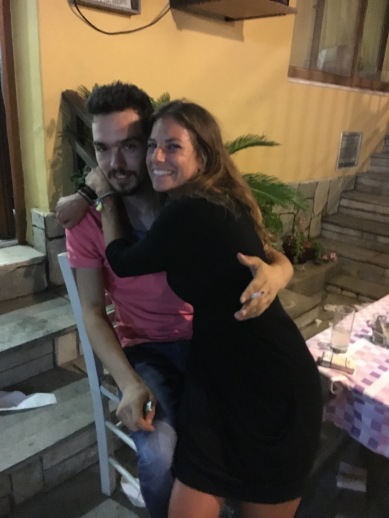