A few months ago I started a blog about my return flight from Hawaii. I was derailed from finishing it, however, because I gave up my seat on my connecting flight to PVD in exchange for an airline voucher, and that required me to taxi across Washington DC, and physically run back and forth between the American and the United desks, almost missing the new flight due to communication errors. Thus, I didn’t have time to finish the blog, or post it, and then it seemed irrelevant.

But today is your lucky day, my friends! Because I’m going to post it now, for reasons that will be revealed later.

A couple of weeks ago, I wrote about my interminable United flight from Chicago to Maui, and I may have complained a little.* I was dreading the journey home from the moment I arrived, so I took efforts to prepare myself for the return: I purchased earphones to provide “entertainment” (really cheap ones, though); I limited my daily food intake in order to overcome airplane starvation (but I still ate a lot of gelato); and I slept in pool chairs to acclimate to neck cramps (pool chairs recline, however, so it wasn’t truly representative of a United experience). Overall, I just faced my flight with dread.

But my parents are magical creatures, like unicorns, and they did the most amazing thing for me for my birthday:

They upgraded my return ticket to First Class–

This is the first First Class Ticket experience I’ve ever had, let alone on a 9-hour trans-Pacific/trans-continental flight, and I could not WAIT to use the seats that turn into beds. I’ve always rolled my eyes at the people who luxuriously lie down in private cubby holes with their pre-flight champagne and eye masks while the rest of us struggle between wake and sleep, rooted to our chairs like bobbing anemone in a zombie-induced Purgatory. But now I get to be one of those luxurious people!

I took a shameless amount of photos, stopping just shy of asking the flight attendant to take a photo of me in full supine position with my covers on. (She didn’t seem good humored enough for it.) I wanted to capture as much of the experience as I could because it’ll likely never happen again.

Observation: the blanket felt as soft as baby bunnies, and if there’s such a thing as an Orthopedic Sleep General, he would have certified that pillow.

Observation: I saw the person across from me hanging his jacket on his cubby wall, which lead me to discover my own hook. I didn’t have a jacket, so I hung my long-sleeved shirt.

Deduction: I have a TV. I have a remote. Surely there are headphones somewhere.

This lead to the most arduous part of the journey: figuring out how to open the secret compartment that housed the headphones. I knew if I waved my hands or pushed a button or said a secret Sanskrit incantation, the wall beside me would open. I looked for buttons. I pushed. I pulled. I said, “Aweirh skdu guguuud,” and when that didn’t work, I did it again in reverse order.

I didn’t want to ask the flight attendant because of our earlier food interaction; she asked what I would like for dinner, pasta, beef, or pork chops.

“Do you have a second choice, in case we run out? We only have so many.”

She scribbled on a pad.

She moved to the duck hunter behind me and asked the same question. He also chose pasta.

She also seemed unamused when I ordered alcoholic beverages in quick succession, ordering a second before finishing the first.

This is beside the point. The point was that I did not ask the flight attendant how to open the magical compartment. There was no handle or button, but I knew it opened. I was looking at all of the buttons on the arm rest, and that was incorrect. I finally just pushed really hard on the door, and I think it opened. I honestly don’t remember how I opened it. Maybe my memory was erased when I exited the flight. Is this what they do to people who don’t belong there? Either way, I do have evidence I got it open!

If you recall, one of my biggest causes of woe on my economy flight was the fact it was 9 hours without so much as a free snack. In fact, the beverage cart only came twice. No meal, even though we’re crossing the continent AND an ocean? It’s a sad day when you’re upset about missing out on plane food.

This flight, however, was an improvement: 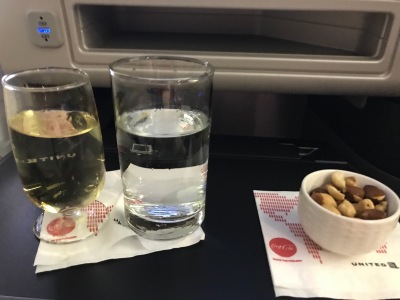 Not pictured: subsequent glasses of wine (I tried both red and white, naturally) and my decaf coffee with Baileys (x2) before bed

And so it was, the only flight I’ve ever been on that I wished would never end.

Instead, we made record time.

Here I am, yet again, at an airport, flying United.

As it turns out, I was able to use the airline voucher from that derailed PVD flight sooner than anticipated. And what a whirlwind it was, planning this trip. I hope to tell you about it from the other side…

7 thoughts on “How To Blend: First Class Flying”