The first time I heard of Fergburger was the day I met Nicole.  We were talking about things to do in Queenstown because I had just moved here, and she said there was this place that makes massively huge burgers. “They really are quite good,” she said in her German/Italian accent, and told me we ought to go there sometime.

I nodded along while thinking absolutely not. I don’t like hamburgers; I’ve never had the urge to order one in a restaurant (with the exception of veggie burgers); and I’ve never been enticed by those random tent events and college lures of free burgers and hotdogs. I’d rather eat ice cream, let’s be honest.

So I pretended to forget the conversation. And then one day, as I was walking through town on my way home, I happened to go by Fergburger. I didn’t remember the name of the place, but as I struggled to paw my way through a long line of backpackers and tourists and a congregation of decently attractive young men, I looked up at the sign and remembered Nicole’s recommendation.

It was like Seinfeld’s Soup Nazi. This place had an honest-to-God line out the door. And it smelled heavenly. Excitement over good-looking men aside, I was intrigued. I called Nicole to ask if there was some sort of Tuesday night special, like burgers for $5 or something, to explain why it was so crowded that evening. “No, it’s always like that.”

We made plans to go later that week.

The day we went, a Friday, the line was still as long but it was a different kind of crowd. A lot of Asian Pacifics taking pictures with their burgers, giving peace signs. “Nicole, don’t judge me, but I’m totally taking a picture with my burger,” I told her.

There were so many options! From the Original Ferg Burger to the Big AL (two patties, two eggs, bacon, cheese, lettuce, tomato, aioli), to burgers made with lamb or chicken or tofu or fish (like, “The Codfather”). I was overwhelmed. I asked Nicole what she recommended, and she said the Original with cheese (Brie, which I’ve never been offered on a hamburger) or the one with falafel, lemon yoghurt, chipotle, avocado and aioli.

Also known as, “The Bun Laden.”

We got the Original with cheese and the Bun Laden, to share, and a side of fries.

Nicole told me it took her several tries before she could finish a Fergburger. My other friend Kirsten says she has yet to finish a whole burger. And it was, indeed, the size of a small human’s head. 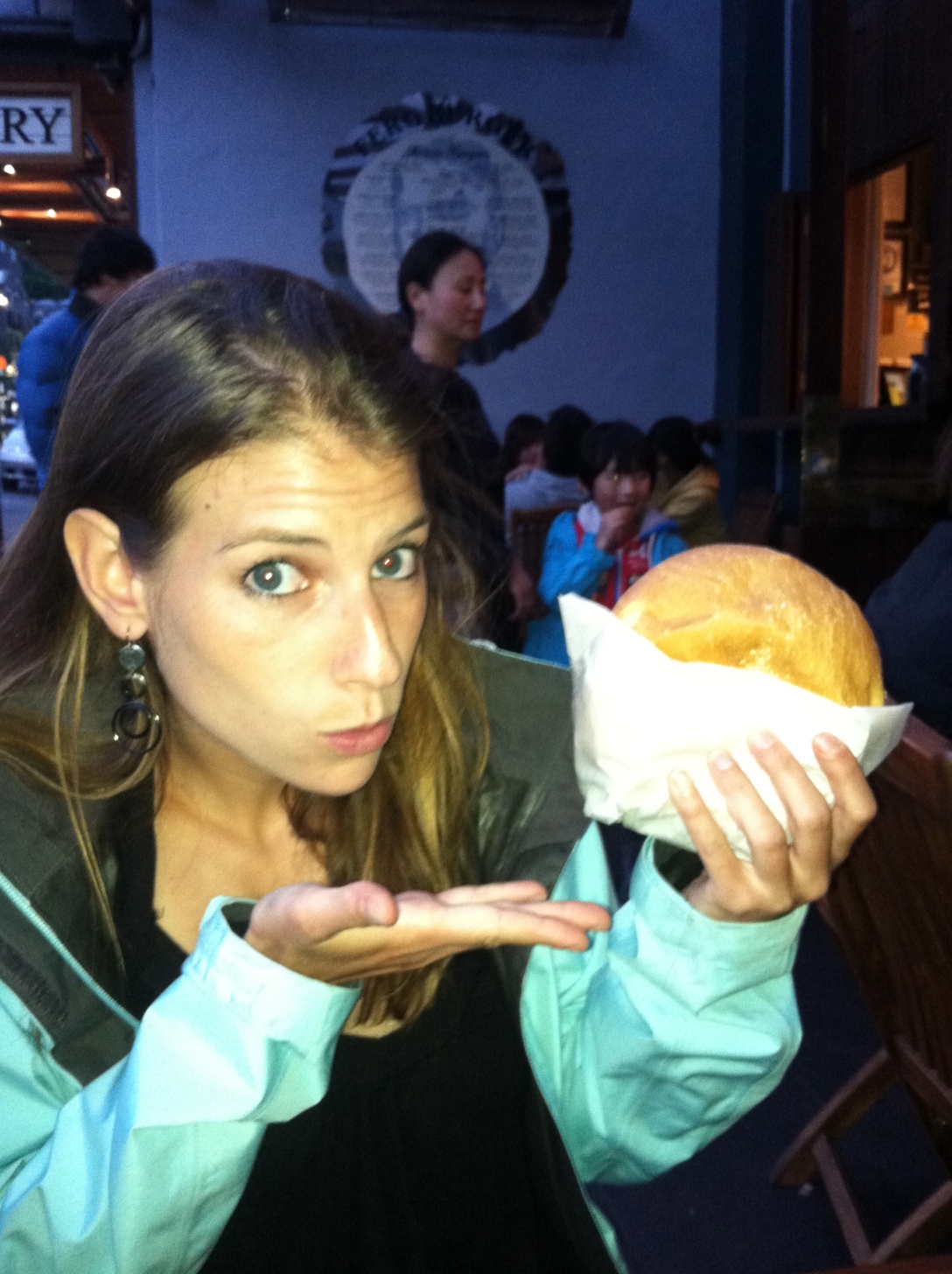 I not only ate an entire burger (half of the original and half of the falafel burger). I also ate the majority of our fries and polished off all the aioli.

I think I need to enter Man vs. Food Nation and put my talents to good use. 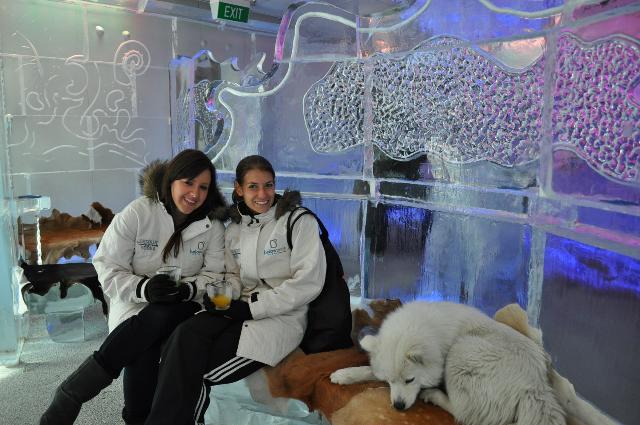 I saw in magazine once an advertisement for a restaurant or bar or building of some sort made entirely of ice. It was like, “have the ‘coolest’ experience of your life and wear a big, ugly jacket and sit on a stool made of ice!” and I remember thinking, why would anyone want to do that?

Well, today I was that person. And to answer the question, it’s so you can say you did it.

There are other perks, too, of course. The ice sculptures are neat, and the only alcohol served is vodka because of its low freezing temperature (take that, tequila!), and there was a dog there that looked like a polar bear—at least it did to Kirsten who stumbled past the Below Zero ice bar one night en route to the alley bathroom. “Wow, they even went so far as to get a polar bear,” she thought.

It turned out it was not a bear, just a fluffy white dog that doubled as a chic magnet, so said its owner.

I would have rolled my eyes, but he had a Scottish-sounding accent, so I giggled and twirled my hair.

ANYway, the drinks tasted more like the juice that was in them than anything else, so I had a lovely pineapple juice, which—come to think of it—was named a “Polar Bear,” and Kirsten had a Chilled Kiwi. Every time you sipped the drink, it seemed to melt a little—the glass, not the drink. Frozen glasses are weird, I’ve decided. 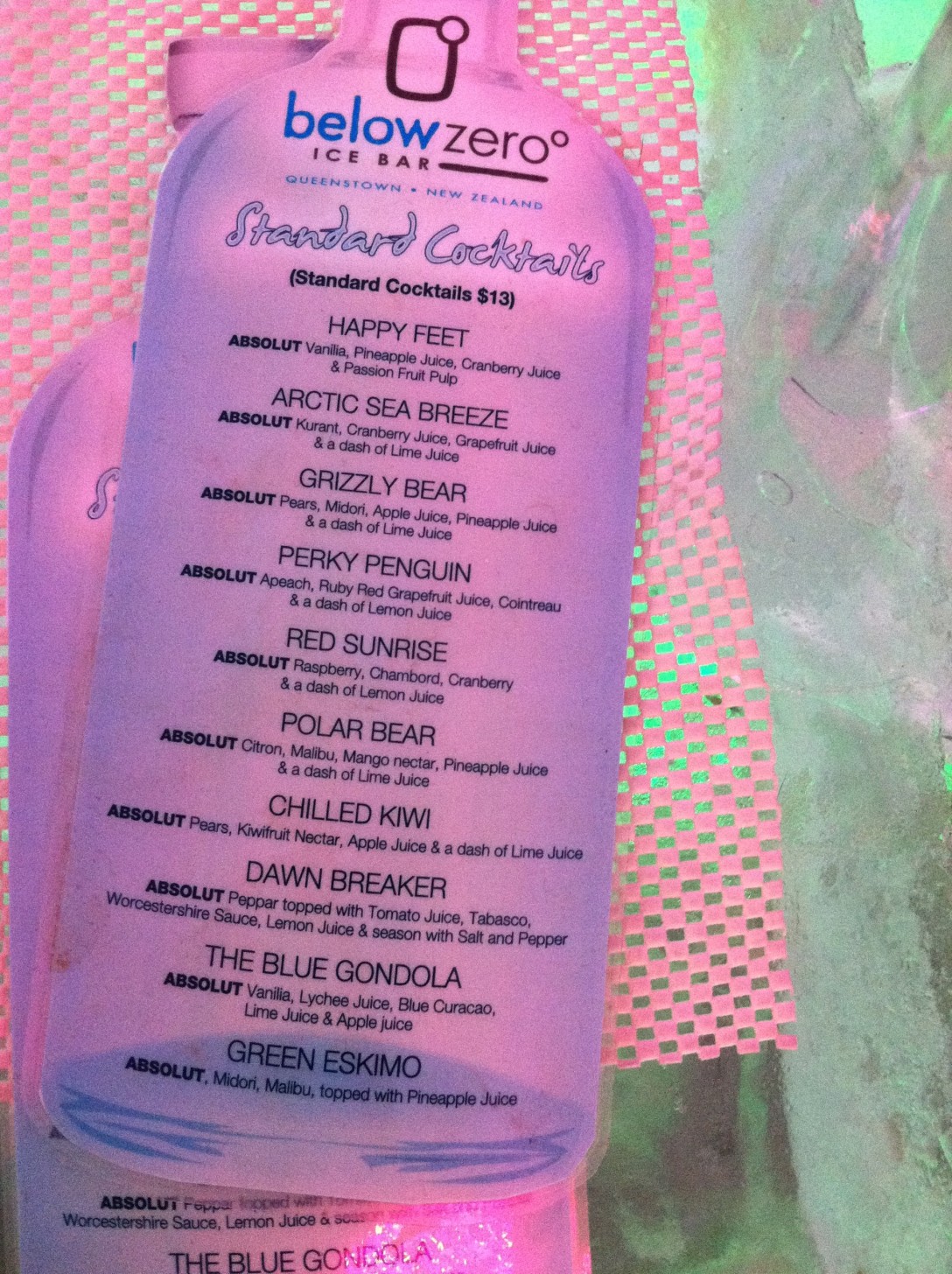 I forgot to mention, they bedecked us in coats and gloves, really awful gloves that are meant for gardening more than warmth, I think, and boots for those who needed them. I was missing my Northface jacket. Had I not been wearing two layers, my normal standard for Queenstown this summer, I would have been very cold. As it was, I was only mildly cold. After ten minutes, however, I said let’s down these drinks and take some pictures and get back outside!

We smashed our glasses. A woman, who spoke in English and who seemed to understand English, looked at me blankly when I asked if she would take mine and Kirsten’s picture. I was about to start gesturing and enunciating with vigor, but she finally said, “Okay” with a not-all-there smile. Only one of the three pictures she took turned out not blurry, and I look like a greased out junkie.

Overall, I was excited by the ice bar. Part of me got a little jealous when I heard Molly’s Restaurant in New Hampshire constructed an ice bar for Winter Carnival this weekend, and I would be missing it. The other part of me has wanted to go to the Ice Bar since I learned about it, and I lucked out because I found tickets online for $1 instead of the normal $20 they charge to enter.

Next on my list is Hubab the Kubab place. Can’t wait.

One thought on “Burgers on Ice”