It’s Friday, y’all! And it’s the Friday in which Brutus earned his way into the 9th level of Hell! Here is a testament to my week.

It all went downhill on Wednesday, hence the delay in posting a blog. As usual, I wrote a blog draft on the morning of Weekly Writing Wednesday, but I spent a lot of time uploading pictures and searching the inner depths of my phone, and by the end of it I realized I wasn’t as funny as I thought it would be (I should learn that “trying” to be funny never works for me), so I figured I’d edit it after lunch.

Well, right before lunch I gave a scantron test in which I numbered my questions incorrectly (numbers 1-16 were fine, then on the next page it started with 13 again), so that was a big mess and confused everyone, and I spent my lunch break fixing my test for the next class, yada yada yada, now the whole system is confounded.

Wednesday afternoon: I did a notebook check for my high schoolers, which I didn’t suspect would take a thousand years, but it did, so I missed my writer’s group after school. I decided to go for a long run to burn off the bad day, and despite the sunny, warm weather we’d had since 9am, it suddenly turned into gusting winds the moment I arrived at the trail.

Yesterday: I had meetings and conferences all day and one crying incident.

And TODAY grades are due , so naturally I’m behind in marking papers and all my students want to know their grades and how they can bring up percentages like a 37% and I have nothing better to say than “Jump in the time machine, go back 9 weeks, and actually turn in your assignments.”

And I STILL haven’t posted a blog.

THEREFORE, despite complete frazzlement, I’ve decided to post the draft I wrote two days ago despite it’s lack of cohesiveness and/or point. And it has nothing to do with the Ides of March, though it wouldn’t surprise me if I end up with a mutiny in my class today.

So, here it is. At least there are pictures.

(from inside my telephone). I apparently have been taking random photos and without doing anything with them except storing them in my phone, so it’s time these moments of strange enlightenment are welcomed into the blogosphere. 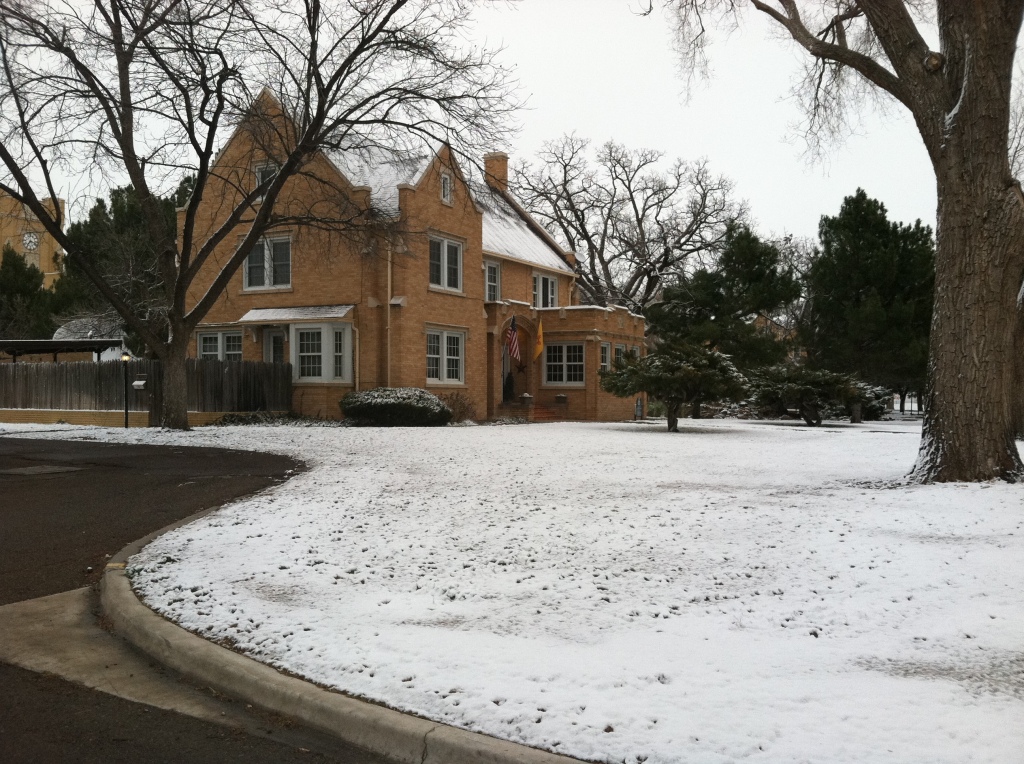 This is Narnia (my school) the morning after a freak-snowfall. 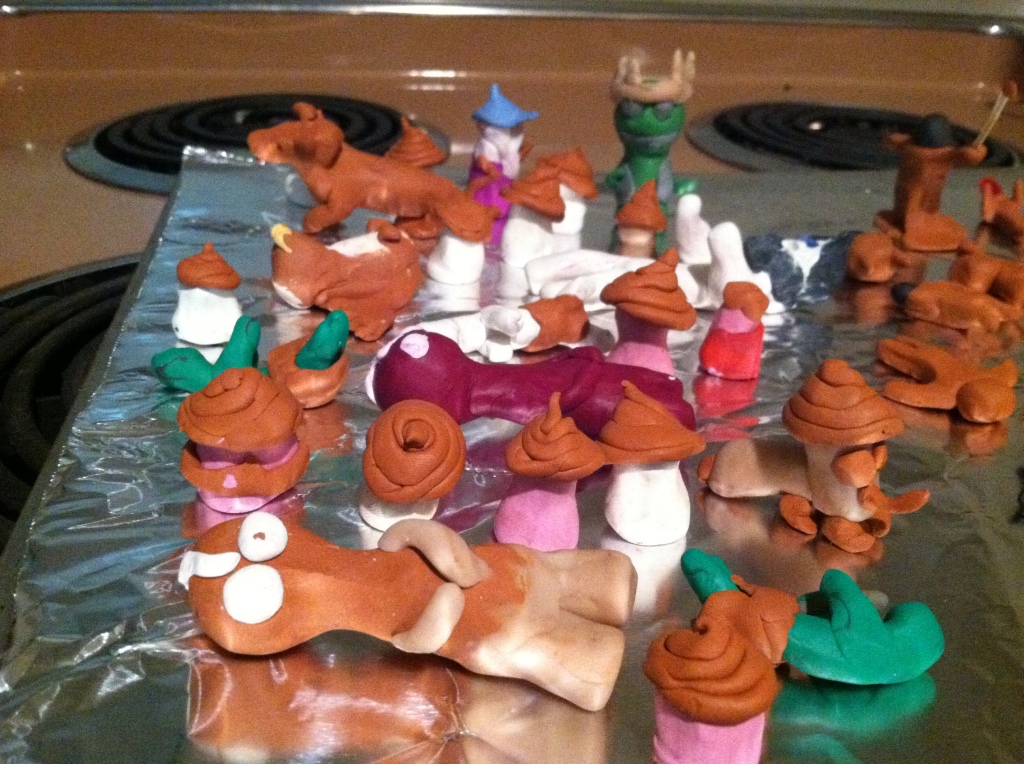 I took this during my students’ map-making project. It becomes clear I have a problem of “taking my work home” when I have to bake 75 clay figurines in my oven on a Thursday night. My whole apartment smelled like weird playdough the next 48 hours. 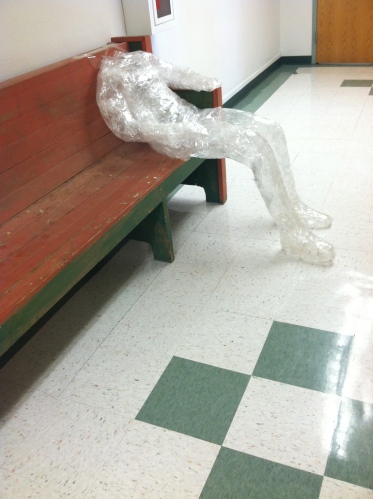 The invisible man has been sitting in the downstairs hallway for quite some time, but he was only recently decapitated. **RIP**

Anytime my hair does something semi-remarkable, like CURL ON ITS OWN, I have to take a picture.

(As someone used to say, “Your hair is so…frizzy, like it just came out of the dryer,” which speaks to the common state of my hair. Although I also, according to this same person, look like John Travolta in a sweatshirt, so take from that what you will.)

I wonder what the checkout person must think. First dairy and chocolate, then the cat food. 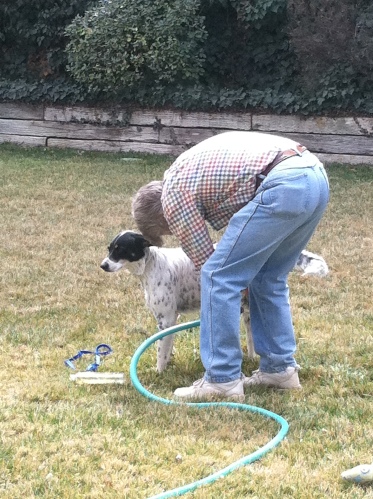 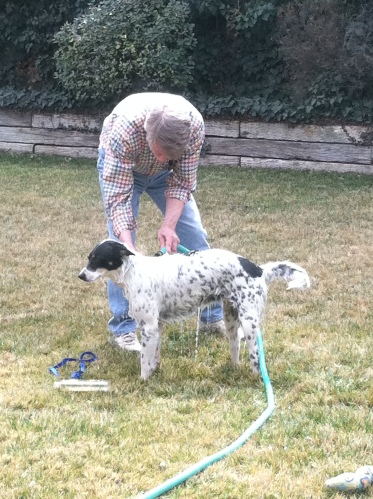 Our dog likes to take on the expression of misery and despair whenever we perform any husbandry type of behavior on her–removing stickers from her paw, putting on her leash, giving her a bath–so I made a lot of coddling noises as I snapped pictures of her forlorn state. 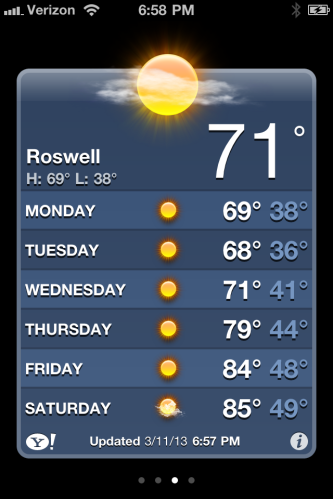 I took this photo of the weather report solely for bragging rights and never did anything with it. So here, world! (i.e., friends on the East Coast who recently got snow). This was the temperature at 7pm on Monday.

(I was wearing shorts at the time. Thanks for asking.)

A friend suggested we play a texting game since my smart phone is not smart enough to play Words With Friends, so we played Would You Rather. Here are some of my questions (because they’re better):

Would you rather have the power to be invisible or read people’s minds?

Would you rather clean cess pools for the rest of your life or have genital herpes and be required to tell every potential partner about it?

Would you rather have your fingernails ripped off one by one or lose a hand?

Would you rather be killed by a swarm of bees or set on fire?

Would you rather bungy jump or skydive?

The last question was followed by this conversation:

J: Probably sky dive bc it will last longer!

J: Would you rather swim with great whites for an hour or be in a gunfight in a war for an hour?

Me: I’ve done both (my question, not yours) and I’d bungy jump a hundred times before skydive again. It wasn’t like I thought it’d be.

Me: I would rather be in a gunfight because I’d feel like I’d have a chance. Have you ever tread water (or swam for your life) for an hour? That’s enough to worry about without the great whites.

J: I guess I thought you would have assumed I meant with an oxygen tank and flippers.

LESSON: Never assume I will not overcomplicate things!

Me: I’d get cold. I still choose war.

In C.S. Lewis’ essay, “We Have ‘No Right to Happiness,'” he creates a scenario in which Mr. A cheats on Mrs. A to get with Mrs. B. And according to one of my students,

There are perks to having one’s parents follow one’s blog.

1.  As long as I say nothing that they (my mother) see as unfavorable towards them (her)*, I hear nothing but wonderful reviews.

2.  They tell other people—coworkers, friends, strangers on the street—to read and support my blog.

3. They create posters of my adventures as seen on my blog and give them to me as welcome home surprises.

4. They learn about my exploits and, most importantly, support my insanity.

The gift I received last week: 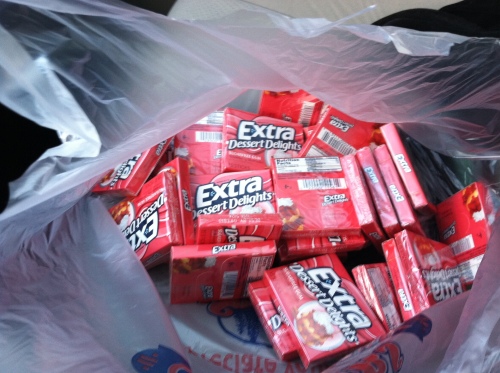 I haven’t counted them all because I don’t want to put a limit on my sense of joy, but these could be— if they lasted more than two weeks—the LAST REMAINING STRAWBERRY SHORTCAKE packs of gum IN THE UNIVERSE.

My mom proposed selling them as a way to finance my European adventure, but I think I would only get enough money to buy a cup of gelato (maybe), so instead I’ll hang onto them and throw them in the air, roll around with them on the floor, and perhaps chew more than one piece a day.

Thanks, Mom and Dad. 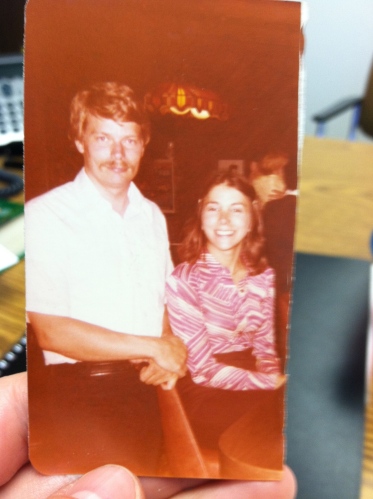 (And congratulations on 42 years [and one week] together 🙂 )

6 thoughts on “Beware the Ides of March”