Greetings, dear friends. As we come to a close of 2017, I wanted to keep in tradition of writing a Top New Year’s list, but instead of writing about food, or pictures, or moments, or pictures of best food moments, I’m going to keep in the spirit of that which has played the largest role in my life during the last 365 days.

In 2017 I decided to start a second blog, which I called “Joyful,” in an effort to live a more joy-filled life. It was the virtual version of a happiness jar or a gratitude journal, where I wrote my moments of gratitude every day and put them online as an accountability measure. (Had I not done this, I would have definitely quit after two months.)

I’m not sure if you saw the part where I said I blogged every day, so I’ll highlight it again. I blogged EVERY DAY this year. That’s 365 days. That’s every day for an entire year no matter the circumstances: coming home late, being exhausted, traveling around the world, working multiple jobs, having a life, having fun, taking Sabbath, feeling intoxicated, feeling sad, feeling unmotivated, being overseas, feeling like is this even worth it, really?

And then during those moments of doubt I would get an email of encouragement from someone who was thankful for the project, or someone who would tell me they were inspired because of something I’d written, or I would find out that my blogs were part of a friend or family member’s morning/weekly routine, and it would make the exhaustion disappear.

Since this was a one-year resolution, however, the Joyful website–and its domain–lasted only for one year, and the blog self-destructed last night at midnight. In a last ditch attempt to save it, I created a WordPress site in which to archive the entries, in case anyone should be interested, and you can find that here.

For this year’s Top List I decided to link up one entry per month, sort of an exemplar joyful moment so you can get a sense of what I was up to all year (I intentionally left out entries that can be found elsewhere on Fushilou, such as the story of the Global Scavenger Hunt). Each Joyful moment is presented with a mini-blurb, so if you’re interested to read more, you can follow the link to finish. Thanks for reading 🙂

The photo above was taken from a friend I met on the island of Thassos, Greece. His name is Alexandru, and he sent it to me on September 11th. He specifically pointed this one out, saying, “The angel in the sky was a great sign of hope.”

Sometimes we need signs from above, in the midst of our anxieties and sadness and trials, to remind us that there is, in fact, hope.

The conversation we had tonight at Home Group Connect–all of Sanctuary’s small groups coming together for a big group conversation–was about identity and vocation and the lenses through which we perceive the world. The image that they used was that of a telescope, the lens that is closest to our viewfinder and how that affects our larger world view. At first we examined this through the lens of our profession:

What we do.
What we have.
What we desire.

This informs who we are, which in turn informs

We were separated into groups by profession and we discussed our shared experiences. What are the expectations, the challenges, the identities we form within the context of (in this case) being a “Writer”?

And then the coolest thing happened.

If you had asked me January 1st, “Will this new blog of yours be full of photos of the food you make at home?” I would have laughed in your face. I might have quipped, “Why yes, I’m very good at unwrapping granola bars and saving the chocolate chips until the end.” I might have said, “Would you like a photo of yogurt or salad?” I would have certainly not thought I’d fill my blog with more home cooking than sunsets.

Today my two other non-sugar eater friends came over when I offered to give them a Taste of New Mexico. If you dare trust me, I will give you the recipe of the greatest creation in all of the world. 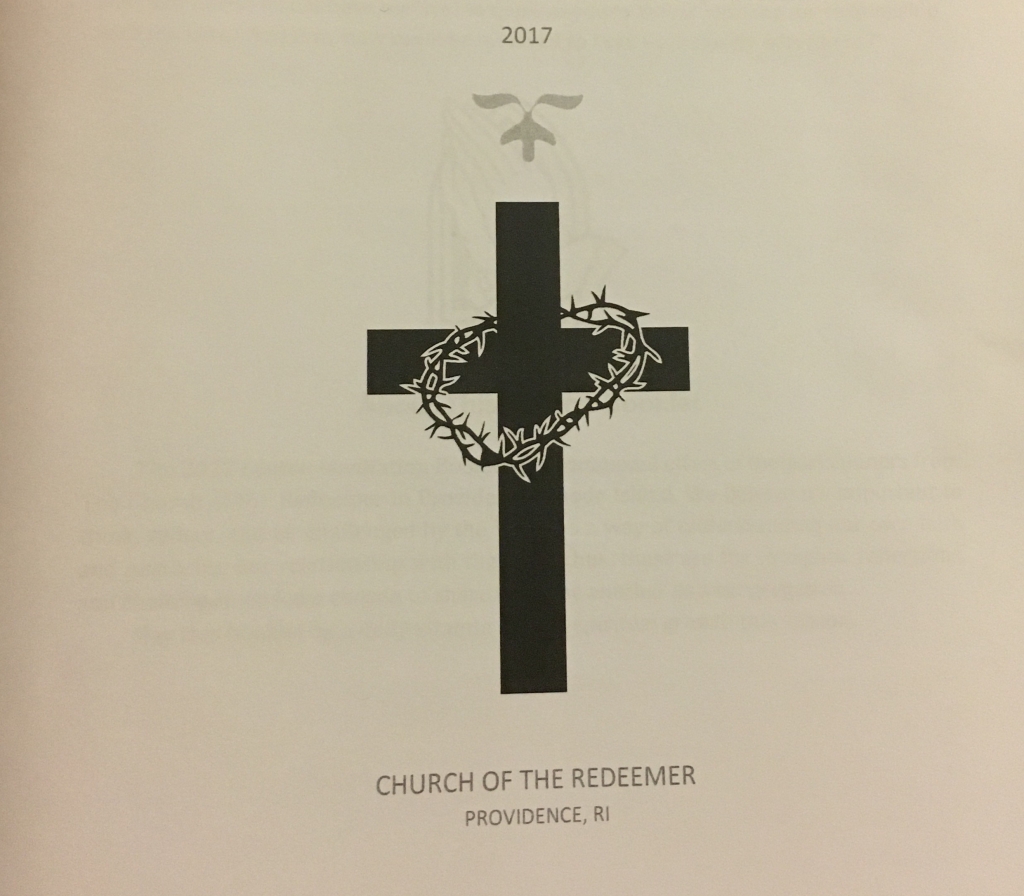 I remember one day in Greece, walking around Archodissa restaurant feeling sad or contemplative or just-not-myself, and Tassos of Thassos immediately picked up on it. “What’s wrong?” he asked. “You are looking like Big Friday.”

“What?” I asked, thinking of the Adams Family.

“Like Big Friday. You know, the day they kill Jesus.”

Well, shortly after my debut, I semi-volunteered, semi-was-commissioned to lead my own section of the writing workshop because The Providence Writers Guild had an unrelenting supply of new people wanting membership, and they thought it was time to open a second section. Who but doth appear to lead this section (2.0)? It is I, Jenny!

Today was THE BEST DAY.

It was full of joy, friendship, and fellowship over drinks, ice cream, and meals.

(Did you see that there was ice cream??)

It was full of praise and awe at God’s hand in all things.

It was the perfect 24-hour vacation. 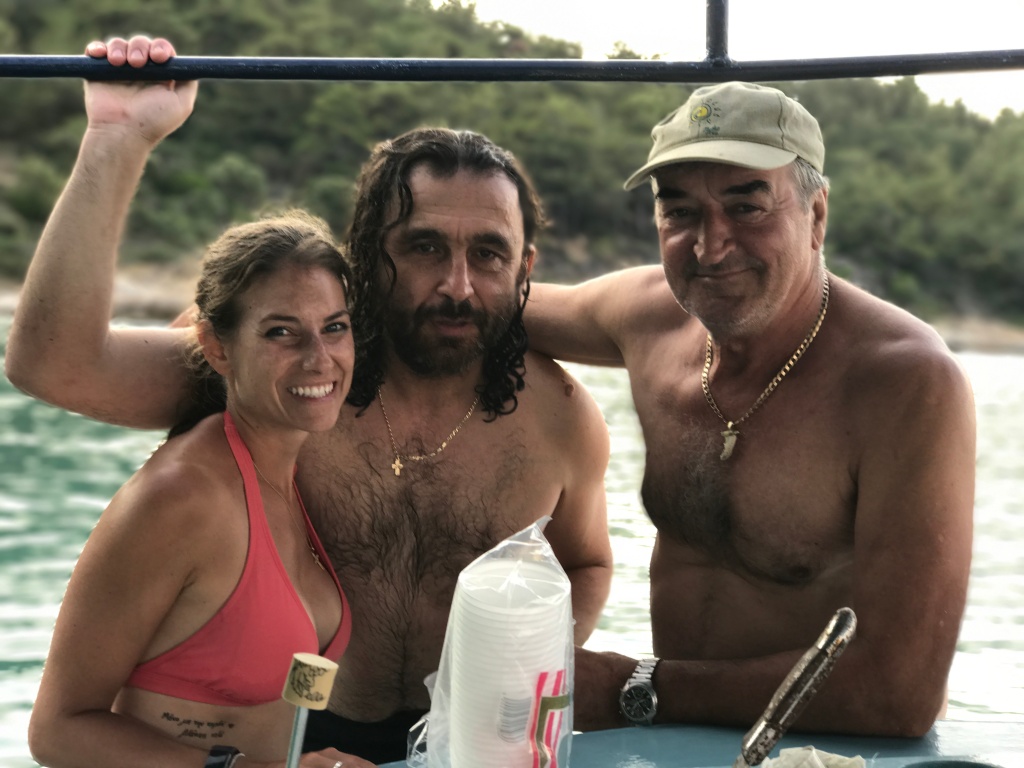 Me the Writer, Giorgos the Painter, and Stamatis the Fisherman, all fishermen together.

A group of us went with Stamatis to put out (and pull in) the fishing nets. We departed at 5:30pm and returned at 10:30pm. We caught the rising full moon, we swam, we drank vodka and ate pretzel sticks, and we watched the fisherman do his masterful work.(continued)

Today I took Stéfanie (my couch surfer from Montreal) to do all the RI things in a Day in the Life of Jenny.

There was an event tonight addressing singleness, and I’ve been venting to my friend about how annoying it is being single in your 30’s–not because I’m in a bad place, but because it feels as though the rest of the world presumes there’s some wrong or pitiable with being single. The pinnacle of achievement seems to be getting married and after that, life is just a joyful breeze of family building and bliss.

It’s taken me a while to realize that what my friends perceive as “too picky” is just my choice in saying: hey, is this person making me into a better person by being around him? Do we have the same vision and goals and moral compasses? If tragedy were to strike, such as illness or infertility or layoffs or loss, would we be able to handle it? Would we pray together, support each other, remain faithful?

If I can’t get through a second date without dreading a third, I’m sorry, but the answer is no. That doesn’t mean I’m choosing the single lifestyle, or that I hate men, or that I’m being irrationally choosy. I’m just trusting that there’s something better (continued)

When I was in Greece, I was running late at night and the moon was huge and bright. I remember noticing the way the lit up the water–I could see everything, miles and miles, all the way from the edge of the sea to the horizon (not to mention, it also made the street on which I was running visible!). I was so moved that I wrote about it later in my notebook, saying, “It’s surprising how something that only reflects light can illuminate such an expanse as the sea.”

Something that only reflects light.

What God revealed to me was that we are meant to be like the moon. He is the source of light–He is light, as John says–but if we are positioned properly, we can reflect His light to illuminate the world.

Evidence my parents love me: they arranged our last dinner together to be at a Greek restaurant in Colorado Springs called Jake and Telly’s. The food was AMAZING. I was surprised how good it was, to be honest.

As we ordered dessert, in walked a guy with a shaved head and a black jacket, and I told my parents, “He looks Greek. I wonder if he’s Greek.”

We finished up our meal and I spied around the restaurant to see where he was. He was sitting alone, and I said again, “I think he’s Greek. Do you think I should ask?”

Both of my parents looked at me like I had two heads. “No,” they said unanimously. (continued) 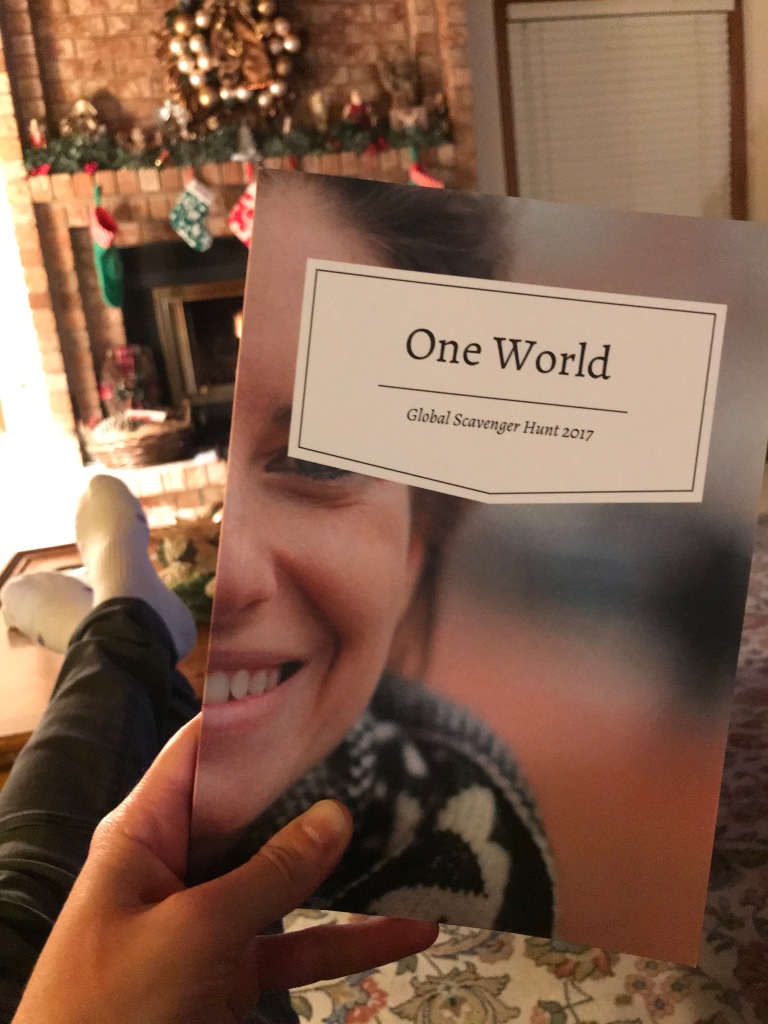 One of the most significant experiences I had in 2017 was participation in the Global Scavenger Hunt. Everything from its inception to its execution were moments of growth for me: taking leaps of faith, trying to listen to the Lord, raising money for charity, traveling to ten countries, disconnecting from the internet and phone, living 24/7 with an almost-stranger, being stretched and challenged to do things I never thought I could do, hoping to make a difference…

And as a present to my parents for Christmas—although it arrived a week late—I made a book of all of my GSH blogs. You could say it was the perfect way to end 2017: a joyful moment that combined family and friends, far-fetched dreams, writing and traveling, spreading kindness, listening to the Lord, and the gift of Christmas.

For all of these, and 353+ more, I offer humble gratitude to God, the bestower of every good and perfect gift.

And thank you to everyone who journeyed with me this year, both in my travels abroad and in my quest to offer daily gratitudes. I’m happy to say that 2017 was, indeed, the most joy-filled year yet. And to you: I wish you a most Joyous and blessed 2018 🙂