To begin with, I arrived in New Zealand on Sunday, to Dunedin, a coastal city on the southeastern side of the southern island (you’ll probably have to scroll down to see it):

Dunedin was described by Nigel (aka “The Man”) as being “more Scottish than the Scottish.” Little did he know, that would be a huge selling point for me. It turns out, a friend of a friend (or rather, a sister of a cousin of a friend) happens to be living in Dunedin, so I contacted her like the crazy, desperate, clueless traveling girl I am.

Thankfully, she’s the coolest girl on the planet (one of, easily) and she offered to pick me up from the airport, shuttle me around, and let me stay with her until I figured out what I was doing. Shout out to Elena! (you can follow her blog here.)  My first night at Elena’s, her roommate, a guy who works at the college health services something or other (sorry for butchering your job title, dude), received a large case of condoms in the mail—presumably to be distributed to students, though I didn’t make that connection right away. Imagine my surprise when he dumped hundreds of condoms on the living room floor.

Kiddinnnng. But he and Elena did arrange the contents of the box into fun messages:

I felt so warmly welcomed to New Zealand 🙂

Long story short, I had sent my résumé to a hotel in Queenstown and they asked if I could come in for an interview on Tuesday, so I packed a back-pack and bought a bus ticket to Queenstown. (In all honesty, had I been inundated with Scotsmen, I might have never ventured out of Dunedin, but since the Scottish seem to be in hiding—maybe they heard I was coming—I decided it was worthwhile to see Queenstown.)

Have I mentioned that Kiwis are the FRIENDLIEST PEOPLE EVER?? A little aside: I went to the bank to set up an account, and the bank lady talked with me for ages about the States and my plans and my holidays, etc., while someone else scheduled me an appointment for that afternoon. Before I left, she gave me chewy fruit candy. It was awesome.

Anyway, friendly Kiwis. So before going to Queenstown, I had responded to an add for housing on the NZ version of craigslist. The person who was advertising turned out to be another amazingly friendly/awesome/helpful Kiwi, and a photographer whose work will make you want to move to New Zealand immediately. (you may need to install flash, but check out his website). He offered to pick me up from the bus station, take me to my interview, and let me crash in the extra room in his apartment.

Anywho, the moment I stepped off of the bus, I was in blissful heaven. Queenstown is beautiful. The town is situated around a lake (Lake Wakatipu), and the lake is surrounded by mountain ranges, one of which is appropriately named “The Remarkables.” Every time you look up and see this view, you can’t help but be blown away. One kid said to me, “You can’t be depressed here. Even if you wake up upset, you look out the window and see THAT, and you forget what it was you were upset about.”

Here’s the view from Jason’s apartment: 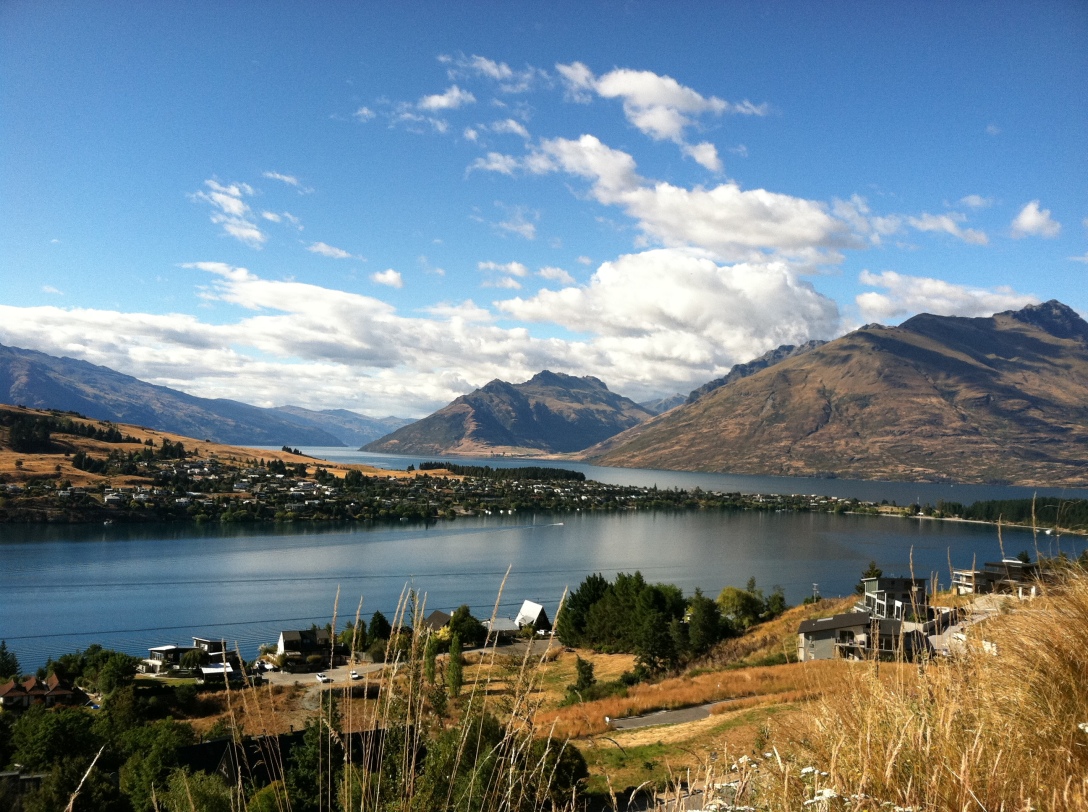 My camera doesn’t do it justice. But sunrise, sunset, midday—I can’t imagine there’d ever be a moment when you think, “eh, it’s just the same ol’ view.”

ANYway, the other reason I knew immediately that Qtown was THE place to be was that it was at least 10 degrees (F) warmer than Dunedin. Talk about panic: until I unloaded off the bus, I’d had to wear my sweatshirt outside, and I only packed a single sweatshirt and one fleece to last me three months. It’s SUMMER. I didn’t stop to think, hey, when the wind blows from the south, it’s coming from ANTARCTICA. Hello.

Not exactly a New Mexican summer.

I also think I like Queenstown because it reminds me a bit of Colorado, like Denver or Aspen or some place similar—just the adventure shops and clothing shops and the coffee shops, it’s fun and a bustling place to be. I want to stop in every store and sign up for everything they offer, from bungy jumping to skydiving to river rafting to winery tours to LOTR tours to hiking the glaciers—THERE’S TOO MUCH TO CHOOSE FROM.

If only I could stumble upon me lucky pot o’ gold and afford it all. I’d happily sell a kidney in exchange for a quadruple adventure package.

Okay, long story short (again), I had the interview; I was offered a job; I found an apartment (near my workplace since I won’t have a car); met Elena’s friends who live in a boarding house up the hill from me: Dutch, German, Italian, Irish, British, and Kiwi folk…

It’s going to be interesting, to say the least.

One thought on “Blogger’s Paradise, or really, Anyone’s Paradise”

This book. My heart. 🐙💜 It is so well written—it makes me love and admire these animals even more. Note: I feel like I should follow this picture with all of the octopus paraphernalia (“O.P.”) in my apartment: paintings, glass sculptures, light fixtures, necklaces, bars of soap, stickers, magnets, coasters... I guess the word is out that I like octopuses? (Also note: “octopuses” not “octopi,” as @sytheauthor explains on page 1). * I write about my encounters with an octopus in my book about Greece (which is coming along slowly...), and I was forever changed. But anyone who is slightly curious about the natural world will absolutely fall for this book, and as a byproduct, the souls of the creatures therein. I give it all the stars. ⭐️ * #bookstagram #octopus #nonfictionbooks #bostonaquarium #octopus🐙 #bookreview #bgood #χταπόδι #animalkingdom #animallove #amwriting #amwritingamemoir #travelwriters #plantbasedmeal #lunchtimefun #dailyreading